This started as a list of acoustic or acoustic-based blues artists with an informed (mostly) guess at the make of the instruments they used during the “Acoustic Era”, i.e. prior to The Second World War. I had a huge amount of feedback (for which many thanks to all you clever, knowledgeable people) about the original list and so I expanded it to cover later artists (including some Gospel), but I still try restrict it to acoustic instruments, give or take the odd added pickup. The information is mostly gathered from repros. of old photographs or stories told by their contemporaries, so, since the photos were not always good, the reproductions were not always accurate and memories were not always reliable, there will be some mistakes in the list. Also, please bear in mind that any one singer would have used several instruments in his career and that he could have borrowed a guitar for the photo session. Any further information to add to the list, to correct the dodgy bits (I know where they are – honest!) or to fill in holes would be much appreciated. There is a note at the end about Stella guitars. 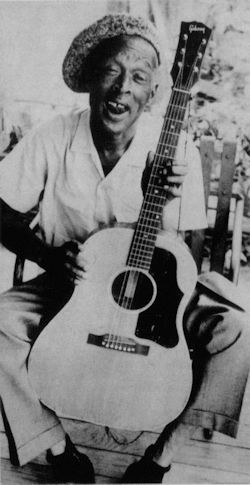 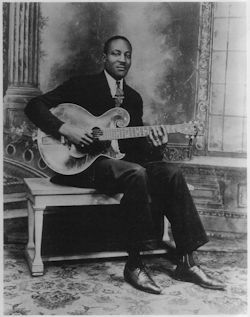 26)   Willie Brown – Stella for the May 1930 recordings; apparently this was the make he preferred.

31)   Blind James Campbell – Kay K-24 flattop. Also the guitarist in his Nashville Street Band played a Kay archtop with all the electrics stripped out.

33)   Bo Carter (p) – National Style N (Gary Atkinson of the wonderful Document Records has a 1930 Style N which he considers to be a possibly Bo Carter’s guitar as shown in the earlier (mid-30s) of the two photos that we know of. The guitar has longer head slots than usual, no neck binding and has a nickel-silver back with a copper front to the body, giving it a unique tonal quality very similar to that on Bo’s recordings of the time). 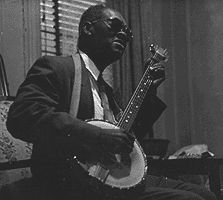 45)   Blind Gary Davis (p) – National Duolian then a Washburn, a Kay K-26 jumbo (1950) and various Gibsons including J200s, B45-12s, Hummingbirds, a Southern Jumbo, a J-50, also Bozo and Martin 12-strings and briefly, a Bozo 6-string and a huge Zemaitis. There are photos of him with a Yamaha  dreadnought and a Martin D-28. His first guitar was “an $18 Washburn for his 8th birthday”. He also played the banjo, a 5-string that he was lent and that I can’t identify, a 1930s Gibson GB-1 (c.1962) and a 12-string Framus which was strung as a 6-string. There is a long-necked Vega-ish instrument pictured on the “Guitar & Banjo” CD, but I can’t tell how many strings it has (plectrum?) The banjo featured on that record was a 6-string. 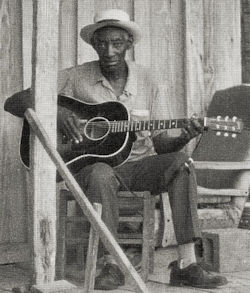 66)   Son House – National Duolian, Triolian or Model O. He favoured Stellas early on and said that he used one for the 1930 recording session; there is a 1960s photo of him holding one, but it was on loan; there is also a late picture of him holding an early 20s Gibson L-1.

67)   Peg Leg Howell – Stellas (there is a 1963 picture of him with a nylon strung guitar). Henry Williams, a member of his “Gang” also played a Stella. 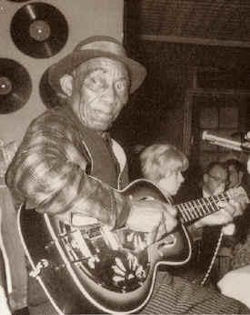 69)   Mississippi John Hurt (p) – The guitar he used on the 1928 sessions was provided by the studio, his personal guitar (“Black Annie”, of unknown provenance) was not considered good enough quality. A Stella (Harmony era) in the 1950s, a Gibson J-45 (customised & refinished) and an Emory belonging to Tom Hoskins,  Gibson/Harmony/homemade 12-string belonging to Peter Silitch, Guild F-30 NT, a Gretsch resophonic (pic.), Harmony Sovereign H1260, 1930 Martin OM-45 (from Stefan Grossman), a custom guitar by Jim Snow and another auditorium-sized by Jack Alderson. This list was culled, in the main, from Philip R. Ratcliffe’s excellent book on Hurt, with input from Stella expert Neil Harpe.

76)   Elmore James – Kay Western Rhythm dreadnought with added electrics (specifically DeArmond Rhythm Chief Model 1000, the actual pickup he uses on most/all of his recordings, mounted on the guitar top between bridge and soundhole, with the DeArmond vol./tone control box hanging down from the bridge. He also experimented with pickups attached over the soundhole. a DeArmond soundhole pickup is present on the November 1959 pictures, not there in 1957 pictures and gone by December 1959 pictures. The Rhythm Chief pickup is present in ALL photos !!). He apparently also used a National Princess. Thanks to the Elmore Oracle “Snakehips” O’Donnell for all that; you can see photos of Richie’s amazing Elmore collection on http://s51.photobucket.com/user/snakehips82/library/My%20Elmore%20Kay. 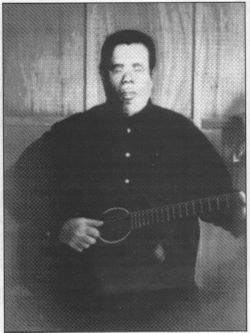 85)   Robert Johnson – 1928 Gibson L-1, Kalamazoo flattop KG-14 (Johnny Shines referred to Johnson’s last guitar as a “big old Kalamazoo”, but he also said that R.J. had a Kalamazoo archtop that he favoured). He was also reputed to have played Stellas and a brass National with the high E string doubled for extra volume.

87)   Blind Willie Johnson – a concert-sized Stella in the photo (poss. taken 1927), but Pillie Bolling borrowed his Washburn in Atlanta 1930. 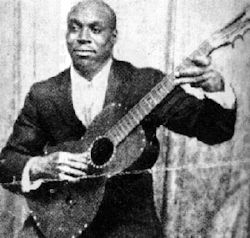 94)   B.B. King – there is a very early photo of him with a well-worn acoustic guitar of strange appearance, possibly with a resonator. Does anybody know what this machine was? Also “a red Stella”, a Gibson L-30 with added electrics (The Original “Lucille” was one of these) and a J-45. 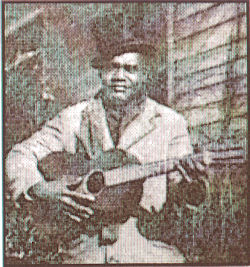 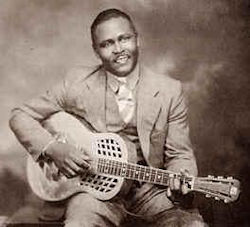 116)     Brownie McGhee – The Martin D-18 is what he’s famous for, but, before that, he played “an f-hole S.S. Stewart” (possibly made by Gibson), a 14-fret National Duolian, 1938 Gibson J35 (later customised with, to the eye, extended f/board & modified bridge), a Martin D-28, a Harmony archtop and a Gibson J-200. He preferred Black Diamond strings with an unwound 3rd and used steel National fingerpicks (2) and a plastic thumbpick. 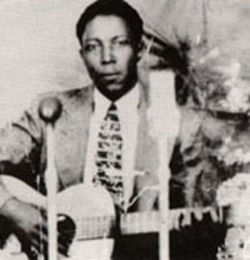 133)     Charlie Patton – Stromberg-Voisinet Concert in the photo; he reportedly used a “brown Stella with lots of fancy pearl and stuff” for some time. Patton was also said to have used “a Gibson with a Black Top” around the time of his last session; the guitar lasted well because of its robust construction, although he apparently preferred Stellas for bass and volume. It is also said that he played and destroyed the odd Washburn.

134)     Ike Perkins (Albert Ammons Rhythm Kings) – Gibson L-5; in 1936 he was photographed holding an early Rickenbacker Frying Pan (prob. A-25), complete with correct amplifier (these guitars had a round neck, so could be played either as Hawaiian or Spanish). The way he held the guitar suggests that he played it in conventional “Spanish” mode, possibly even while standing.

136)     Washington Phillips – a complex double zither of his own devising. 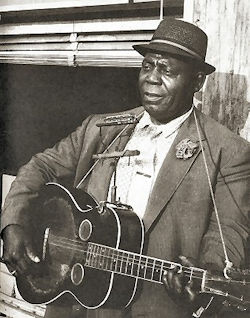 153)     J.D. “Jelly-Jaw” Short (p) – Stella, Regal (Dobro) Model 37 spanish with the resonator cover removed and the hole filled in with wood (also with a wonderful custom harp-rack clamped to the top bout). The photo showing this guitar was taken in 1962 when he was recorded by Sam Charters and the guitar he used sounds like a Dobro with its resonator intact.

156)     Smoky Babe (Robert Brown) – Stella 922 12-string customised as a 6-string with the tailpiece removed and the floating bridge replaced with a fixed, string-retainer type. 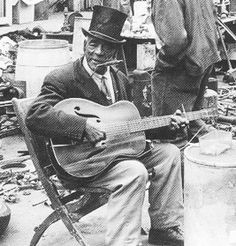 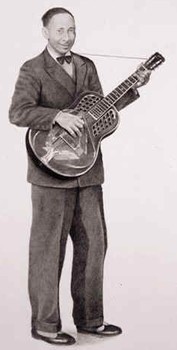 176)     Henry Townsend – Stella, also a Thorn or Thornton which he says was the best ever (prob. a Thornward by Lyon & Healy – thanks Todd). Later, Henry was filmed using a c.1937 National Model O.

180)     Muddy Waters (p) – Stella, followed by “a beautiful Sears-Roebuck box”, a borrowed Martin for the L. C. session, a National Trojan (maybe a Sears model?) in 1943 John Work photo, Harmony Archtop, Gibson Southern Jumbo and the “dunno” in the picture (for “Folk Singer”). 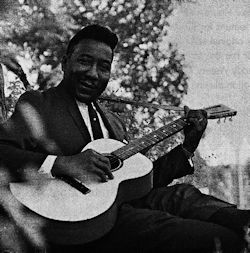 184)     Bill Weldon – Stella (1927). If you believe that the early picture is of Casey Bill Weldon, then you should know that the guitar that he favoured on the 1935 onward recordings was, almost certainly, a National Tricone squareneck. There is a poor quality photograph of him with an electric lap steel which I can’t identify; the photo is dated 1941, but he “went electric” before Dec. 1938 – his last recording session.

185)     Booker T “Bukka” White (p) – National Duolians & Triolians after his first Stella; he swapped a Gibson “in bad shape” for his first National. He also used a very rare 1938 National “Exploding Palmtree” squareneck Tricone, with the nut cut down for use with fingers, on the Takoma Sessions and was filmed playing a Gibson J45 and Furry Lewis’s B25N. 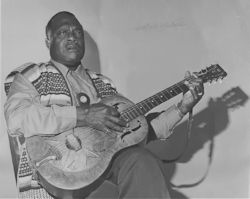 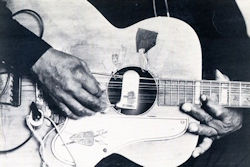 Note: I realise that I’m guilty of using “Stella” on occasions when I can’t identify the exact model of a guitar, but it could be a Stella and it’s of that type of instrument; I’ve become aware that I’m not alone in this irritating tic (I’m told I’m even worse on banjos), some of the most reliable of Blues artistes use “Stella” in the same way, when they can’t remember, or never actually knew, the correct make or model that they played, or saw played. Stella guitars were made by the Oscar Schmidt Company of New Jersey before 1935 and by John Carner’s Stella Company from 1935 to 1940. These were usually well made, playable and relatively cheap instruments with good tone and projection. Harmony took over the name in 1940 and the quality dipped rather, although some made under the Sovereign marque were OK. I am not good on Stella models and so I have made some errors in identification and I certainly have not tried to differentiate between Stellas and other brands that were applied to Stella guitars, e.g. Sears, Galiano, Sterling, etc.. All rather bewildering, but if you wish to be less confused, I recommend reading Neil Harpe’s excellent “The Stella Guitar Book” available from his website http://www.stellaguitars.com. Also Paul Brett’s magnificent collection of Stellas, etc. is viewable on http://www.fret-dancer.com; his other site http://www.paulbrettguitarist.co.uk/ has a Q&A section where people can send pictures of their vintage guitars for identification and valuation, also you can ask all sorts of question regarding care and maintenance, where to buy parts etc.. Recommended!

I should also add that Harmony, Regal, Richter and Kay also made guitars under very many different brand names for differing reasons, and that some brands featured instruments made by several manufacturers, e.g. Supertone, Concertone, Recording King, in fact it appears that Richter almost never used their own name on a guitar. Even the “top” makers such as Gibson, Martin and Larson Bros. produced guitars under other names for the larger dealers in these times. 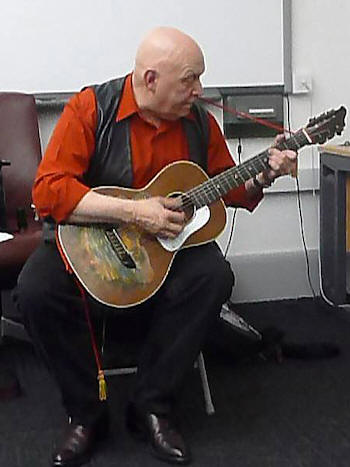 “The guitar is a mahogany Stromberg-Voisinet from c1925 and is a slightly more deluxe version of the guitar that Charley Patton is cradling in the photo. I believe that they made three styles of this guitar and Charley’s is the basic model (the decal on his guitar also might denote a lower level of trim – I’ve seen another gold garland type that extended much further over the body of the guitar), mine has a fancier bridge, a strip of marquetry around the inside edge of the body binding and a scratch plate. The usual top of the range model had the same stuff as mine, including the large hawaiian decal, but with a fancier scratch plate and a pearl celluloid fingerboard (known as Mother-of-Toilet-Seat in the trade), also the marquetry strip was fancier. It has a nice, refined sound with plenty of bass and projection, but isn’t the loudest guitar around.”

Check out some details about Dai Thomas
You can contact Dai by Email at d.thomas@talktalk.net