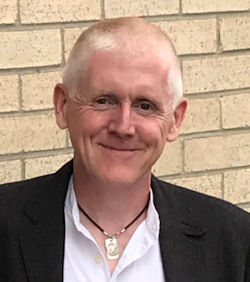 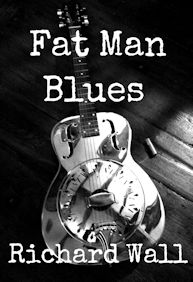 A self-confessed Delta Blues music anorak, Richard embarked on a road trip from Memphis to New Orleans, where a bizarre encounter in Clarksdale, Mississippi resulted in him writing his début novel, ‘Fat Man Blues’.

Alan:  Where are you from and what are your first musical memories?

Richard:   I was born in a small market town in Herefordshire in 1962, not exactly a crossfire hurricane, but it had its moments. My first musical memory was hearing “I’ll Be There” by the Four Tops on the radio. A few years later my older brother went away to university and would come home with albums by the Rolling Stones.

Alan:  What first attracted you to the blues?

Richard:   Listening to early Rolling Stones albums like Beggars Banquet, Let It Bleed, Sticky Fingers and Exile on Main St. All of which had covers of old blues songs. I began to research the names and discovered a treasure trove of wonderful music all the way back to Charley Patton – who is my absolute hero.

Alan:  What does the blues mean to you?

Richard:   They say that blues is a feeling. For me the blues can be joyous, entertaining, comedic, tragic and heart-breaking, all of these emotions portrayed within a line from a song, a slide guitar riff, or even a spoken aside between verses. I prefer the old delta blues of Charley Patton, Son House and Booker White, and the Memphis blues of Furry Lewis and Frank Stokes. Listening to scratchy old recordings of these great artists is like taking a time machine back to the 1920s and 1930s. The recording equipment back then was so primitive that what you hear is exactly how it sounded. Everything was captured during those sessions – the clatter of a bottleneck against the frets, the sound of a steam train passing by outside. And of course, the music.

Alan:  What inspired you to write a book, especially about the Blues?

Richard:   I’ve always enjoyed writing, and the advent of self-publishing services such as Amazon has made it so much easier for a writer to get their work ‘out there’. The inspiration for Fat Man Blues came about following a chance comment by my friend, following a drunken bar crawl around Clarksdale, Mississippi.

Alan:  Regarding your fine blues novel ‘Fat Man Blues’ is the story based on your experiences or travels?

Richard:   Thank you for the kind words. The opening chapter is based upon an encounter in Red’s Juke Joint in Clarksdale. At the time my wife and I were on a road trip through Mississippi with friends, following the Blues Trail. It was a complete immersion in the blues, and landmarks and conversations with locals, together with anecdotes from blues history became source material for much of the story, with my imagination filling in the blanks.

Alan:  What was the most challenging part of writing the book?

Richard:   The most challenging part was ensuring that the dialogue was accurate, realistic, and sounded authentic. I spent many hours listening to interview recordings of Howlin’ Wolf, David ‘Honeyboy’ Edwards, Furry Lewis and Pops Staples. A friend of mine, Ran Walker, is a writing professor from Hampton University in Virginia. He grew up in Mississippi and was a great help, giving me much prized feedback and providing advice on local colloquialisms, as spoken by his grandfather in rural Mississippi.

Alan:  What success have you had with the book?

Richard:   Well, it was released in 2015, and I’m still selling copies, so I’m very pleased with that, and so far it has attracted 66 Five-Star reviews on Amazon, from readers across the world. It reached #1 in the Amazon Blues Bestsellers, which made me very happy. Cerys Matthews has mentioned it a couple of times on her BBC6Music show, and I’ve been interviewed at BBC Hereford & Worcester, and BBC Radio Suffolk. I was very proud when the Delta Blues Museum in Clarksdale, Mississippi agreed to sell it in their gift shop. My agent in London is working hard to get a book (and film deal) but it all takes time.

Alan:  I see that Rita King (daughter of Blues Legend BB King) is a fan of your book – how did that come about?

Richard:   Shortly after I released Fat Man Blues, I joined Facebook and made myself known among the blues community. Rita King got in touch to wish me luck with the book. It took me a few moments to realise that her dad was BB King, so that was a shock. A few months later Rita published her own book “Messages from my Sister” and included me among the acknowledgements. Which was nice.

Alan:  In what formats is the book available and where can you get it?

Richard:   Fat Man Blues is available in e-book and paperback formats from Amazon. Signed copies are available from my website.

Alan:  You have written a poem about the book and it’s been turned into a song, tell me more.

Richard:   One of the great things about writing Fat Man Blues is that it’s brought me into contact with a multitude of talented blues performers. Worcestershire blues singer, Tone Tanner lives not far from me and generously invited me to read from Fat Man Blues during one of his gigs. I wrote the poem ‘Fat Man Blues’ as a means of promoting the novel. I mentioned it to Tone who came up with a cool slide guitar riff and eventually recorded it as a song, due to be included in his upcoming EP ‘Duels’.

Alan:  I now hear you have written a screenplay adaptation of the book for a feature film and TV series I believe, how far have you got, what interest have you had? Tell me more.

Richard:   Several reviews of the novel mention that “it would make a great film”, so I had a go at writing a script. It was a great deal harder work that I thought, but I’m pleased with the end result. My agent, Kizzy Thomson, and I have put together a film treatment, which has attracted the attention of a director in California. All we need is the funding!

Alan:  What other books have you written?

Richard:   Fat Man Blues is my first novel. I’ve written short stories that are available as e-books from Amazon.

Alan:  Some music styles may be fads but the blues is always with us. Why do you think that is?

Richard:   Well, the way I see it is that anyone who has any interest in making music will eventually find their way back to the blues as being the start of it all. Add to that, if you think of the number of blues performers that play local venues across the world, each with their own followers (not to mention any musical offspring) then it’s no surprise that the blues is being kept alive. 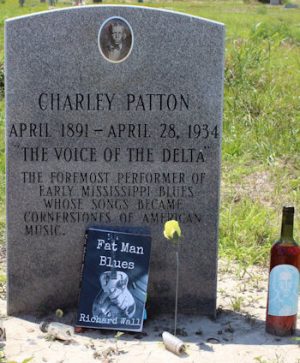 Alan:  How do you see the future of blues music?

Richard:   I was talking about this with Trevor Babajack Steger the other day. Hopefully the blues we all know and love will be around for a long time. That said, I think there also has to be an element of creativity added to the mix, to allow for other influences, and to make it more accessible. New and diverse blues acts ought to be encouraged onto the live circuit. In Worcestershire, where I live, we can see this in the likes of Trevor Steger, Gary Tolley and Tone Tanner, all of whom write their own songs, infused with the blues as they see it. Further north, Andrew ‘HalfDeafClatch’ McLatchie is also making his own music, he calls it Gothic Americana, but the blues element runs through it like a thread. We need to keep playing and we need to get rid of the idea put forward by the “Blues Police” that blues should only be based on a 12-Bar chord sequence. Charley Patton never played 12 bar blues.

Alan:  Are there any more blues novels or similar projects in the pipeline?

Richard:   I’m writing my second novel, Last Rites at Sing Sing, which is a crime thriller set in NYC in 1962. There are blues references, but it’s not a blues story. I’ve made a start on the sequel to Fat Man Blues, but my agent is very keen that I complete ‘Last Rites’ first! I’ve also written a few articles about local musicians for Worcestershire publications, and I’ve just interviewed Trevor Babajack Steger for Blues in Britain magazine. This is something I would like to pursue in the future.

Alan:   Thank you so much Richard, I really appreciate your time.