There can’t be many blues / R ’n B bands who neither feature this song in their act nor at least know it. Even people on the edge of the blues world can hum the melody or sing one verse. In the 1950’s it appeared in a film about the Deep South called “Baby Doll” (adapted from a Tennessee Williams play, I think). The only highlight, apart from Carol Baker’s legs! was the unidentif­ied harp player sitting by a fence and singing a very creditable couple of verses to his excellent harmonica accompaniment.

In the ‘60s blues boom many bands in the U.K. started to perform the song and some recorded it. Most notable were the Rolling Stones and the Animals. Of course much later on, the fine and frenetic version by Them injected new life into “Baby Please Don’t Go”.

The inspiration for this article came from a question posed by a drummer in a local R ’n B outfit: “Who did “Baby Please Don’t Go’ in the first place?” and a suggestion from my friend and slide guitarist Roger Higgins to trace the origins of some well-known blues numbers. So here goes. 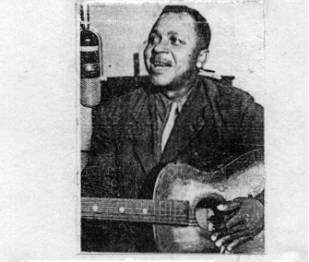 The blues,” Baby Please Don’t Go” was first recorded by Mississippi’s Poor/Big Joe Williams in the autumn of 1935 for Victor’s cheap-priced Bluebird label. This was William’s second session on record, having cut a largely solo one in the early part of the same year, But here he is backed by Chasey Collins on fiddle and “Kokomo” on washboard to give a decidedly rural and ‘archaic’ feeling to the piece.

Poor Joe Williams at one of his 1935 recording sessions.

Some of the more familiar verses are included in an earlier form, but still recognisable. Joe seems a little unsure of himself maybe his first time playing in a group, and the answering line to the opening verse is replaced with the more familiar one in verse 8. The “rollin’ fog” in verse 6 refers to Joe’s home in Crawford, Mississippi. which was on the edge of the Knoxford Swamp and would often be enshrouded in mists. He had 2 more studio sessions before recording his second version of this song, both with a small group. In December, 1941, he called it “Please Don’t Go”. By now Joe was really at home working with other musicians and he oozes con­fidence as he encourages John Lee ‘Sonny Boy’ Williamson in the break. The mood of the piece has shifted to a definite urban one with the latter’s superb harp and the swing­ing bass cano (a kind of imitation bass) of Alfred Elkins. With this version of “Baby Please Don’t Go”, the listener can easily recognise the move to electric instruments and how the number is a natural for R ’n B bands in the 50’s, 60’s, etc.

As can be seen, Joe has “firmed up” the lyric structure and moved verse 8 of the 1935 blues to the opener here. By concentr­ating more on a general sense of mistreatment by his partner, and the county farm, the singer delivers the verses so familiar to our ears; incidentally, dropping one verse off altogether. The “walk the log” verse (verse 5) appears for the first time, on this outing.

Although the song is “…extant in many versions” (l), it was, surprisingly, rarely recorded before 1942: the pre-war blues era. Some of the prolifically recorded artists who could easily have adapted the song for black urban tastes in the 1930s, such as Memphis Minnie, Big Bill, Jazz Gillum or Tampa Red, seemed to ignore the song: at least on their recordings. However, a couple of “covers” did crop up on wax between Joe William’s 2 recording dates already discussed (1935 and 1941) which included the first version of the song on disc.

The first one occurred almost a year after “Baby Please Don’t Go” hit the record stores. In September, 1936, a singer known only as “Tampa Kid” cut the song under the same title (unheard by me) in Chicago for Decca Records. Constituting one-half of his recorded output, the only detail we know is that “This singer gives a passable imitation of Tampa Red” (2). Perhaps this is why he disappeared into obscurity so quickly.

An artist who is better known, Leonard Caston, recorded his “Baby Please Don’t Go” incorporating the “walk the log” verse into his title some 18 months prior to Joe Williams second version of the song. Caston, usually a guitarist and pianist associated with the ‘slick’ harmonising blues with the Five Breezes (whose recording session in 1940 marked the debut on wax, of bass man/songwriter Willie Dixon) and the Big Three Trio in post-war years, is surprisingly ‘raw’ and unsophisticated. An unidentified washboard player supplies a choppy rhythm to Caston’s guitar and vocal:

Although Caston as “Baby Doo” omitted the title verse of “Baby Please Don’t Go” he retains Joe’s opening verse from the 1935 recording. He further establishes links with this version by his use of a washboard player, and leaving out all references to the county farm, long chain, etc. Caston concentrates on the mistreating woman. This includes the culinary symbolism for her art at making love in verse 2. While reference to Natchez reminds the listener of his Mississippi origins (he was born near Hattiesburg, Miss. in 1917 and died “22 August 1987 Minneapolis, Minnesota”, (4)).

Baby, Please Don’t Go” is often associated with Poor/Big Joe Williams (in 1963, Paul Oliver credited him with composing it) who recorded several post-war versions of the song. But both he and “Baby Doo” Caston drew on a group of earlier blues songs: “Alabama Bound”/Elder Greene’s In Town”/ “Don’t Leave Me Here”. Oliver reports that a Texas collector “published.. . an “Alabama Boun’” with Elder Green verses, which he dated from 1908.” (5). As Oliver notes, in 1925, banjoist Papa Charlie Jackson’s “I’m Alabama Bound” showed the links between all three titles. “Elder Greene” would be featured on later recordings by Blind Lemon Jefferson Charlie Patton(1920s) and in 1958 by Mississippi singer/guitarist “Cat-Iron”. “Alabama Bound” was recorded by Leadbelly in 1935 and 1940 and cropped up c.1956 by Lonnie Donegan during the British skiffle craze! Whilst “Don’t Leave Me Here” was first recorded in 1927 by a Mississippi group who were sometimes billed as “Sunny Boy And His Pals” or “Long Cleve Reed” and “Little Harvey Hull”. Tampa Red and Georgia Tom backed each other’s vocals on “Mama Don’t Leave Me Here” (1931) and “Don’t Leave Me Here”(1932), respectively; but are 2 versions of an unrelated blues. 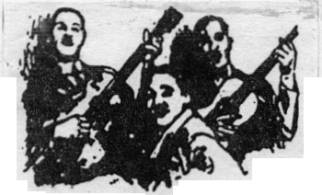 Quiz: Who are these?

Washboard Sam recorded “Don’t Leave Me Here” in 1938 again unheard by me but is probably an urbanised version of the Long Cleve Reed title or of “Baby Please Don’t Go”. The melody from this group of songs was utilised and speeded up with a more aggressive approach to the vocal. Indeed, Big Joe William’s first post­war version of “Baby Please Don’t Go” was titled “Don’t You Leave Me Here”, made in 1947. Though the string bass of Ransom Knowling and the drums of Judge Riley have been added to Sonny Boy’s harp, giving a ‘Chicago blues’ feel to the song Joe himself, curiously, harks back to many of the lines of his 1935 recording with fiddle and washboard. These include the reference to “his long chain on” and “my baby’s done lyin’.’ Joe substitutes the phrase ‘don’t you leave me here’ for ‘baby please don’t go’ and changes the Southern locale of New Orleans for the more relevant one of Chicago, where he cut this track.

But it was not the Chicago blues giants like Muddy Waters, Howling Wolf, Little Walter, Elmore James, etc. who kept the song alive in the earlier post-war years. It was left to singers of the older rural blues styles. Like Delta bluesman Bukka White who first recorded in 1930 but didn’t cut “Baby Please Don’t Go” until 1963 for John Fahey’s Takoma label. In the same year, Big Joe re-recorded it as “Don’t You Leave Me Here” in Copenhagen, with just his nine-string guitar, on Storyville. Both of these were on album (L.P.) releases. In the late 1970s, Georgia blues singer William Robertson recorded (also on L.P.) a dark and intense “Baby Please Don’t Go” with bottleneck guitar for Flyright. This was one of Robertson’s “unique adaptations of commercial recordings” (6). On the same album, Bastin informs us that John Lee Ziegler, sane 7 years younger than Robertson (b.1929), “performed. . .BABY PLEASE DON’T GO in 1951”(7).

This was at an annual Fort Valley Ham and Eggs Festival held in southern Georgia featuring black sacred and secular music from 1940 to the middle 1950s. It was incorporated into a rural agricultural show run by the local black teachers’ college , which had been going since 1915. Not until British groups in the 1960s (the Stones, etc.) picked it up, did “Baby Please Don’t Go” become a popular vehicle for contemporary blues and r ’n b bands.