This is a collection of articles and books relating to Blues Poetry, the Poets and Poetry about the Blues and Blues Artists. We hope to add to the collection over time, so if you have any articles or books about Blues Poetry and would like to contribute, please email alan.white@earlyblues.com .

Here is our introduction to the collection:
Poetry and The Blues – by Christine White
“There are two words that are particularly difficult to define in the English language; ‘poetry’ and ‘blues’. To attempt to classify these two together is even more difficult yet a large number of blues critics claim that blues lyrics are poetry. This paper proposes to examine the definitions of ‘poetry’ and ‘blues’ and to consider the extent to which it is justified to link the two”.

The Blues and Jazz Poetry of Langston Hughes : A Personal Appreciation – by Ray Smith
“Langston Hughes’s first published poem, ‘The Negro Speaks of Rivers’, was in a 1921 issue of The Crisis magazine. This was to become one of his most famous poems, later appearing in Brownie’s Book and he included it in his first book of poetry, The Weary Blues in 1926”….. 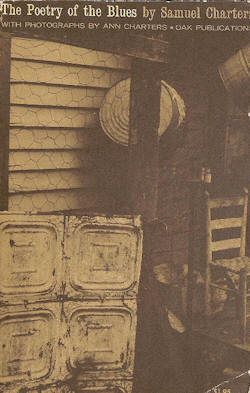 The Poetry of The Blues
–  by Sam Charters

“The work songs from which much of the blues has been derived were like seeds scattered across the southern landscape. Wherever they strayed the blues sprang up after them & as a man sang the blues he scattered the material farther, until the blues became a nearly communal expression of the Negro in America. Most of the verses of the blues are used by every singer, & they have become the root language for the more personal singers like John Estes & Robert Johnson. I have not mentioned a particular singer as the source for these verses; since this would tend to imply that there is someone who could be thought of as having written them. The best singers, however, often developed a group of verses which became their personal material, & if the verse seemed to be related to one singer I have mentioned his name. Often the verses are used in two or three blues; since the blues is a pliant idiom, so I have not used a title with the verse. I have tried to suggest some of the casualness of blues composition by following the singers’ own use of the verse. In those blues which have become a personal poetry I have generally mentioned both the singer & the title he has given to his song”.
– Samuel Charters, New Hampshire. November, 1962 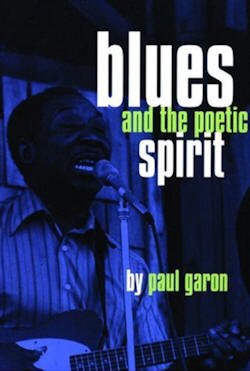 Blues and the Poetic Spirit
– by Paul Garon

While much has been written about the sociological significance of the blues, this is a unique inquiry into the blues and the mind, a study of the blues as thought. Here, the subconscious power of the blues is examined from a poetic and psychological perspective, illuminating the blues’ deepest creative sources and exploring its far-reaching influence and appeal.

Like Surrealist poetry in particular, blues communicate through highly charged symbols of aggression and desire—eros, crime, magic, night, and drugs, among others. A close analysis of classic blues lyrics, along with a wealth of source material from Freud and James Frazer, to Breton and Marcuse, conveys the blues’ major poetic function of spiritual revolt against repression. 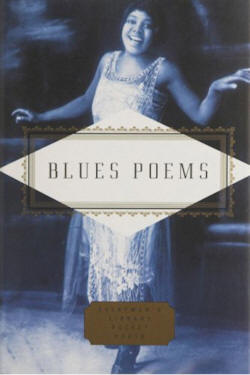 The blues has left an indelible mark on the work of a diverse range of poets: from “The Weary Blues” by Langston Hughes and “Funeral Blues” by W. H. Auden, to “Blues on Yellow” by Marilyn Chin and “Reservation Blues” by Sherman Alexie. Here are blues-influenced and blues–inflected poems from, among others, Gwendolyn Brooks, Allen Ginsberg, June Jordan, Richard Wright, Nikki Giovanni, Charles Wright, Yusef Komunyakaa, and Cornelius Eady. And here, too, are classic song lyrics-poems in their own right-from Bessie Smith, Robert Johnson, Ma Rainey, and Muddy Waters.

The rich emotional palette of the blues is fully represented here in verse that pays tribute to the heart and humor of the music, and in poems that swing with its history and hard-bitten hope. 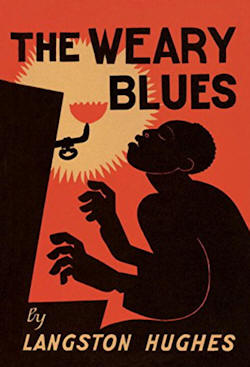 The Weary Blues
– by Langston Hughes

Nearly ninety years after its first publication, this celebratory edition of The Weary Blues reminds us of the stunning achievement of Langston Hughes, who was just twenty-four at its first appearance. Beginning with the opening “Proem” (prologue poem)—“I am a Negro: / Black as the night is black, / Black like the depths of my Africa”—Hughes spoke directly, intimately, and powerfully of the experiences of African Americans at a time when their voices were newly being heard in our literature. As the legendary Carl Van Vechten wrote in a brief introduction to the original 1926 edition, “His cabaret songs throb with the true jazz rhythm; his sea-pieces ache with a calm, melancholy lyricism; he cries bitterly from the heart of his race . . . Always, however, his stanzas are subjective, personal,” and, he concludes, they are the expression of “an essentially sensitive and subtly illusive nature.” That illusive nature darts among these early lines and begins to reveal itself, with precocious confidence and clarity. 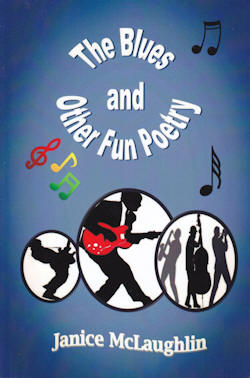 The Blues and Other Fun Poetry
– by Janice McLaughlin

Janice McLaughlin of southwestern Pennsylvania has in recent years studied and mastered different forms of poetry. ‘The Blues and Other Fun Poetry’ is her third book of poetry forms.

All essays are the copyright of individual authors – see each essay for details.
For further information please email: alan.white@earlyblues.com