“Talk About That” – John Mayall 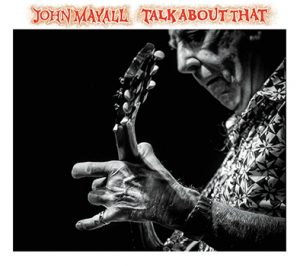 This Christmas people are paying a lot of attention to the Rolling Stones, because they’ve issued a Blues album. Slightly less fuss is being made about John Mayall, although he’s never issued anything but Blues albums – some sixty-five or so of them at present count. He’s always commanded the best musicians -it’s worth remembering that long-time Rolling Stone Mick Taylor served his apprenticeship with The Bluesbreakers – and it says something about the quality of his music and his leadership that musos with superstar status, like Joe Walsh, are still queueing up to play with him.

John’s bassist Greg Rzab is almost a superstar in his own right, with a CV which includes work with Otis Rush, Buddy Guy, Junior Wells, Stevie Ray Vaughan and Jimmy Page, as well as bands The Black Crowes and Gov’t Mule. When John asked Greg to recommend a drummer, he brought in his friend Jay Davenport, whose resumé includes Sugar Blue, Junior Wells, Pinetop Perkins and The Dells. This experienced and well-matched pair provide John with a super-tight, sympathetic rhythm section, and although guitarist Rocky Athas has “done a Clapton” and left before the album was released, he’s not been replaced. John and his two sidemen are now working as a trio, placing a stronger emphasis on John’s considerable abilities as a multi-instrumentalist, vocalist and songwriter.

The CD sleeve includes a note of the key every song’s recorded in, so you can play along, or even tune your guitar to it. And Forty Below Records have introduced a “Talk About That” promotional feature – share a John Mayall-related musical memory in the form of a picture, video, or story, on Facebook, Twitter, or Instagram using the hashtag #TalkAboutMayall, or email your memory to talkaboutmayall@gmail.com ., and they’ll post your recollections on their bulletin board, from which John will pick a winner. You have to pre-order a CD before January 27th to qualify, but given the quality of this album, that’s a pretty sound plan anyway. The tracks are as follows:

1) “Talk About That” Look out, ladies, Mr Mayall’s on the prowl, and he sounds decidedly dangerous! Greg Rzab’s slapping bass introduces an infectious funk rhythm, while John proceeds to tell us what a fine figure of a feller he is, in what The Mothers of Invention used to call a “Body Commercial.” This kind of sexual braggadocio has been part of the Bluesman’s tradition, from the days of Banty Roosters and Crawling King Snakes, and although John’s boasting here, I have a suspicion that he’s not doing so entirely idly. Anyone who can front a gigging three-piece band at the age of 83 can’t be short on stamina. The rhythm section’s faultlessly funky, and John lays down some cool, piping organ sounds on this compelling first cut.

2) “It’s Hard Going Up” John’s fluid piano intros a Bettye Crutcher number, covered in the 70’s by Little Sonny and in the 90’s by Nine Below Zero. John’s version comes in at a loping shuffle, with bright, choppy punctuations from the brass section. There’s more gravel in John’s voice that we’ve been used to hearing of late, and the song reinforces his own statement from the previous number, that he’s had “many ups and downs.” Knowing what little I do of John’s life, I imagine that’s a gigantic understatement. His keyboard work is smooth and classy, and there’s a lovely warm, late night Soul feel to the track.

3) “The Devil Must Be Laughing” is a very deliberate Slow Blues, with tasteful guitar from Joe Walsh, sounding occasionally reminiscent of Dave Gilmour, which is neither a criticism nor a complaint. Mayall’s in exceptionally strong voice again, and putting in some neat organ fills too. The song reflects on the current political climate, pleading “God help the human race!” and in these days of endless warring John’s comment is accurate enough. Recorded in one take, it features a beautiful, emotive outro solo from Walsh, and it’s definitely one for repeated listening.

4) “Gimme Some Of That Gumbo” New Orleans-style brass fills and beautifully phrased, tinkling piano keep the pot boiling on this Bo-Diddley-inspired bouillabaisse. It also features the first solos on the album from Rocky, whose licks are tidy and controlled, with a typically modern, smooth overdriven sound. Tasty driving rhythm work from Greg and Jay lead the number to a nice clean dead stop ending. Stirring stuff, and quite a departure from John’s usual bill of fare. I think it’s about food…

5) “Goin’ Away Baby” is the Jimmy Rogers standard, taken at a nice lick, with brushes on the drums keeping it light. John drops his voice to a lower register, creating a more intimate effect. His harmonica is in the Rice Miller style, acoustic and “up close,” so you can hear his breaths in the phrasing, and the guitar is quite minimal. I’m showing my own age when I say, it takes a good old Bluesman to deliver some good old fashioned Blues, and John doesn’t disappoint.

6) “Cards On The Table” Walsh rows straight in with some nice bottleneck on this syncopated swinger, as John advertises himself as single and very available, it must be all that clean living that does it! Walsh’s sinuous and sexy slide – something I’ve not heard much of in The Eagles – is entirely “subject-appropriate.” The overall effect is really catchy, and I’d love to hear this one on the radio.

7) “I Didn’t Mean To Hurt You” A slow blues with a funky backbeat and light, understated electric piano, the guitar is ‘strictly rhythm.’ John looks wistfully back at his long life and the sad days when he’s lost love along the way. Recently divorced, John’s always written about his own life and feelings, and shared them with the listener with admirable honesty, and there’s no change to that here.

8) “Don’t Deny Me” features acoustic piano over a swinging shuffle beat, and although it’s a cover written by Jerry Lee Williams, the seductive words appear very much in tune with the feeling behind some of John’s own originals on this album. Brass replies to John’s vocal and rounds the sound out, and Greg Rzab’s bass breaks into some lovely ‘walking’ during the solos, where Rocky delivers some gently smouldering guitar licks.

9) “Blue Midnight” Electric Piano begins this number which starts with the words “it’s After Midnight,” inviting comparisons with J.J. Cale. There’s a passing resemblance, but it starts and ends with the insistent beat. As in many a classic Blues, John’s woman’s done left him, and he’s hoping she’ll come back one day. But if she doesn’t, he says, he’ll survive, and survival is one of John’s greatest strengths.

10) “Across The County Line” has a neat harp intro, and answering riffs from the brass. With tom toms to the fore and a bass line that reminds me just a little of Ray Charles, this is one that should get the dancers on the floor at the end of the evening. A lively ‘Jam’ number, that credits all the band in the composing.

11) “You Never Know” is approached with brushes on the drums, beautiful ‘Longhaired’ piano work, and a very relaxed, mellow feel. “You never know how your life’s gonna be,” sings John, and he’s so right there! But there’s no sense of dejection, and in spite of the sadness and soul-searching, there’s a terrific sense of warmth and enjoyment running through this album. John’s not just going through the motions, he evidently still gets a great kick out of writing, playing, and performing, and I for one am very glad to hear it.

In these strange days, the market seems dominated by Blues that’s been re-interpreted with jaw-dropping technique and sledgehammer sensitivity, or by some bizarre hybrid they call “Americana,” and we no longer listen to Muddy, Jimmy, John Lee or The Wolf. It’s comforting to know that, while all that 21 st Century stuff’s going on, there’s someone out there still doing his own thing, in his own style, the way he always has, the way a Bluesman should. John Mayall is the real deal, and long may he endure.