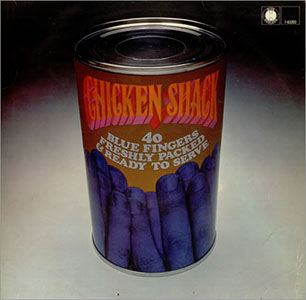 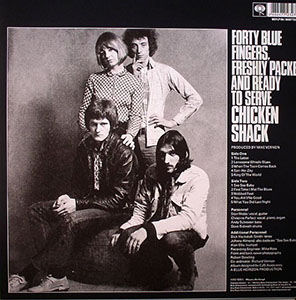 Behind a bizarre, but award-winning cover lurked Mike Vernon’s latest discovery for his newly-established Blue Horizon label, Birmingham four-piece Chicken Shack. Born out of a band called Shades Of Blue, they were graduates of Hamburg’s notorious Star Club, where the Beatles cut their teeth. Webb recounted, “We were one of the first bands with great stacks of Marshall amps behind us. We were so bloody loud, we could – and did – get away with murder!” Like stable-mates Fleetwood Mac, they had two stars, with very different styles, sharing the spotlight– showman Stan Webb on vocals and guitar, and chanteuse Christine Perfect on keyboards.

Bassist Andy Silvester was a founder member, but by the time they’d landed a prestigious tour as Freddie King’s backing group, they’d worked their way through three drummers – Alan Morley, ex-Bluesbreaker Hughie Flint, and Houston-born Al Sykes, who’d played with BB King. However, as Mike Vernon recalled, “Getting the outfit back to the UK with an American musician in tow however, and without the required work permit, presented some problems. Anyone who actually got to see the band perform in that early format witnessed a rare event .” Eventually pressures became too much and Alvin departed, to be replaced by Dave Bidwell, from Peter Green’s old band The Muskrats, who passed the audition, in spite of others’ misgivings, because Stan, a fan of big band jazz such as Duke Ellington and Count Basie, liked the way he “swung.” Vernon tells us, “Both Stan and more particularly, Andy Silvester, took on the job of tutoring Dave in the art of blues drumming.”

Named after a Jimmy Smith track, a juke joint, a fast food franchise, or the chicken coop they were reputed to rehearse in, the band’s main focus was on Stan’s superb guitar work and stagecraft, as he performed in the styles of Freddie King and Buddy Guy, complete with a 100-foot guitar lead that allowed him to walk among the audience while still playing. But Christine’s keyboard skills, tuneful voice and flair for composition gave the group yet another dimension. As Mike Vernon put it, “They had the ‘it’ girl of the blues world in Christine Perfect – a demure, attractive and talented young singer and pianist, and an outstanding hard, driving rhythm section in Andy Silvester and Dave Bidwell. But perhaps most of all, they had a blues ‘nutter’ in Stan Webb, whose energetic and enthusiastic guitar playing along with his almost larger than life persona, and occasional acrobatic vocal histrionics, personified sheer entertainment.”

Like most albums of the time, it was recorded in haste with little time for fancy tricks or overdubs. Vernon later said, “For some reason there seemed to be a real sense of urgency to get this album recorded as quickly as possible – as if the band would explode or disappear into the ether if we didn’t! In total, ten tracks were recorded during the first week of February 1968 and all found their way onto “Forty Blue Fingers, Freshly Packed and Ready To Serve.” The title photo and credits leave no room for sleeve notes, so the music has to speak for itself, which it does eloquently.

Trk. 1) “The Letter.” It’s a brave statement to start an album with a slow Blues, and this one’s taken at a more measured pace than BB King’s original, but Stan carries it off expertly, displaying a beautiful tone, some lovely phrasing, and a very impressive falsetto. Ms Perfect contributes some smooth organ and lovely, jazzy piano fills, the rhythm section are cool and solid, all very classy.

Trk. 2) “Lonesome Whistle Blues.” The “woo-woo” vocals of Freddie King’s original are replaced by a tight brass section of Alan Ellis, Johnny Almond & Dick Heckstall-Smith, and Andy Silvester’s bass drives rather than walks on the chorus. Overall a much brighter, catchier take on the song, which feels far too short at its three minutes. Nicely done.

Trk. 3) Christine’s “When The Train Gets Back” puts her distinctive, even vocal to the fore, conveying her Blues without histrionics as she resigns herself to losing a two-timing lover. A pumping bass keeps the pace ticking along, while a recurring piano figure and unusual turnaround chords give this moving song distinction as well as appeal. Webb adds some weird vibrato effects and a touch of slide, bringing a new aspect to his sound. Altogether outstanding, and greatly preferable to the brass-enhanced “single version.”

Trk. 4) Nominally Freddie King’s instrumental “San Ho-Zay,” though Freddie’s version has some verses of sixteen bars and some of twelve, while Webb’s version is a 12-bar throughout, and includes some verses in stop-time. In spite of the differences, he nails Freddie’s tone – something Clapton had tried hard to do – and provides some very respectable axe wielding.

Trk. 5) Like many Hooker numbers, “King Of The World” is a one-chord workout, though John Lee’s version has the boogie in it, while Chicken Shack’s is inclined to plod a bit by comparison. Allowing that, in all fairness, he was never going to command the same vocal authority as JLH, Webb still doesn’t seem to be able to decide quite how to deliver this, and fluctuates between falsetto and growls. But his sense of humour shines through at the end, when having listed all the things he’d do if he was king of the world, he concludes, “but I ain’t, so I won’t!” Fair enough! 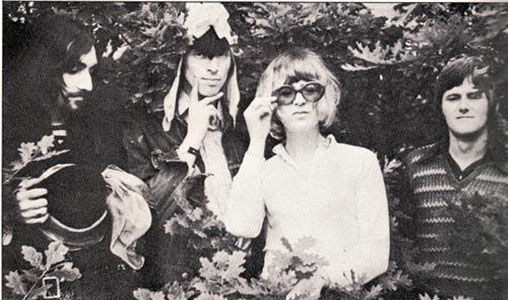 Trk. 1) If there was any track here that bore out Dave Bidwell’s ability to “swing,” this fine cover of Freddie King’s “See See Baby” is the one. Relaxed and mellow, with tight, clean playing from the horn section, plus the bonus of a jazzy saxophone solo. Smooth!

Trk. 2) Stan Webb’s firmly in Buddy Guy’s neck of the woods with this version of “First Time I Met The Blues,” as he slides his voice up to those high notes you thought only a ‘Friendly Chap’ could reach. His guitar playing’s fast and fluid, and the rest of the band provide suitable and sympathetic support. A very creditable effort indeed.

Trk. 3) “Webbed Feet” isn’t so much a composition, as Stan’s guitar improvisations over a fast humpty-dumpty shuffle. Acceptable fare, though not outstanding.

Trk. 4) Ms. Perfect’s other contribution is the excellent “You Ain’t No Good,” a kind of “aisle, altar, hymn” song – she fancies a bad boy who lies, swears and cheats, but she can’t help loving him and she’s determined to change him. Not exactly women’s lib, I’ll grant you, but this strange and deliberate ditty brims with genuine emotion. Very British Blues, with a strikingly fluent piano solo and economical guitar from Webb, top marks.

Trk. 5) Webb’s second original, “What You Did Last Night,” is a moody one-chord routine based on a riff reminiscent of “Help Me” with some very nifty plank-spanking. I suspect his great abilities as an entertainer brought more out of it in a live performance, but to me it suggests that he’s more comfortable here being Freddie King or Buddy Guy than being Stan Webb. Although Christine appears the stronger songwriter on this album, Stan’s writing blossomed after she left the band, bearing fruit with a top thirty hit “Tears In The Wind.” 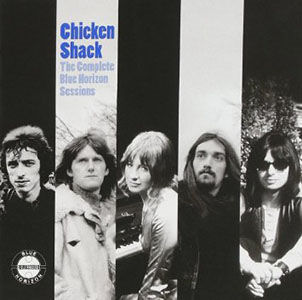 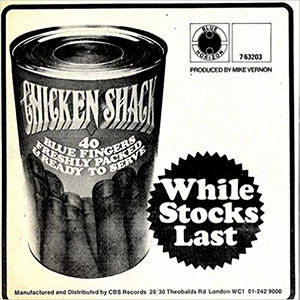 ‘Melody Maker’ called the band ” one of the most inventive blues groups in the country,” saying “musically, Chicken Shack reach moments of high excitement, especially on Stan Webb’s extended guitar solos.” ‘Forty Blue Fingers..’ is still available in its original form on CD, though if you shop around, you can find ‘Chicken Shack: The Complete Blue Horizon Sessions’ for a very similar price. It offers all four albums and A’s and B’s of their singles, including the two post-Perfect LPs with Plastic Penny’s Paul Raymond on keys, which showed Webb moving towards grittier guitar sounds, and styles a little more outside the strict Blues framework. But it’s an undeniable bargain, and you do get both sides of their excellent debut single, pairing Christine’s catchy “It’s Okay With Me Baby” with Stan’s tasty take on Buddy Guy’s “When My Left Eye Jumps,” which Vernon described as “almost six and one half minutes of exactly what you would get if you went to a Chicken Shack gig around that era. Nothing but the Blues!” As a bonus, it also contains their top twenty version of “I’d Rather Go Blind.”

While Christine Perfect/McVie has gone on to become a bona fide International Rock Star, with a fistful of hit songs to her name, Stan Webb still boogies round Europe, in a more modest way, with his own Chicken Shack. But in the halcyon days when they were together, they created this excellent LP which reached number 12 in the UK charts, and still deserves to be remembered as a Classic Album of British Blues.