This article is about the early blues record shop specialists in the UK back in the 1960s. It came about following a session reminiscing about record shops and the scarcity of blues records back then. We hope you enjoy it.

A rough estimate of the number of record shops which specialised in blues in England during the 1960s, as far as I can recall, numbered about 10! This among many hundreds of record shops/stores in the UK.  There were no other outlets at that time.  Virtually all the rest did not include a ‘Blues’ section in their racks, although a very mixed ‘jazz section was included which was heavily slanted towards ‘modern jazz’ in most of its various (often disputed) forms.

About half of these blues outlets were situated-not surprisingly-in London.  Including Dobell’s, 77 Records, in Charing Cross Road and Dave Carey’s Swing Shop which was located a little further out in Streatham, South London.  It was the latter that along with my kid brother Rex, we would make the ‘pilgrimage’, several times a year.  It seemed like a pilgrimage as living in the area including Weybridge, Surrey, which was some 23 miles to the centre of London, the journey required up to ride two trains and sometimes a bus.

On finally arriving at the Swing Shop, we discovered the floor area was little bigger than an average-sized living room!  All the LPs were stacked vertically and it was not possible to do much in the way of browsing. However, if Dave was asked about one of the LPs he advertised in the monthly Jazz Journal, he could generally lay his hands on it within a few minutes.  His ad-a full page on the inside back cover- was how we got to know of any blues albums in stock.  We could then hear some of the selected LP on a small turntable situated near the door of the shop (no individual booths, then) and so any other customers could hear artists we chose, like Sam Collins, Walter Davis, Henry Thomas, et al.  A rare treat for ‘em as they were usually jazz fans!  Dave Carey himself was a vibes player in a small jazz outfit. 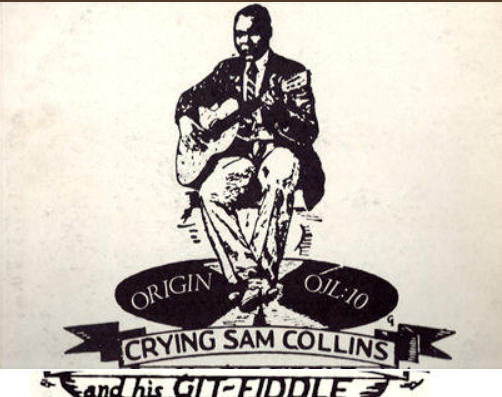 After ’agonising’ at some length on which of the records we heard, one (all we could afford!) was then selected.  Generally, Rex bought a different album so we had 2 to dig.  But on one occasion-at least- we both bought the same one.  And one of these was by Crying Sam Collins and his ‘Git Fiddle’, on Origin OJL 10.  Whatta find that was.  Ethereal falsetto vocals with a keening bottleneck guitar. This IS the Blues!  On another occasion, we listened to Volume 2 on the rare London-based Down With The Game label.  Including the first Casey Bill Weldon tracks we heard and the almost single-entendre (!) ‘Think You Need A Shot’ by Walter Davis.  In fine sound too! 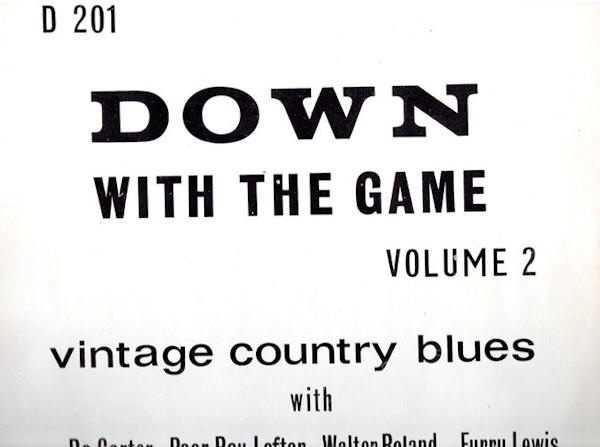 One of a series of five volumes before disappearing. All these early reissues of pre-war blues were ‘Limited Editions’.  DWG  ran to 100 copies and presumably if they sold out would sometimes press another 100.  While Origin  often did 500 copies at a time. But the impoverished blues fan never knew when supplies might dry up!  In passing, it should be noted these LP cover shots represent a part-representation.

This was prior to the appearance of the Austrian-based Roots RL 300 series running to 40 albums. Before morphing into Document LPs and eventually CDs. The latter extending to some 600(!) discs covering the entire contents of the ‘Blues Bible’: Blues & Gospel Records 1890-1943 by the 4th-and latest!- edition in 1997.  Also in the mid- 960s, the US label Yazoo arrived, albeit as ‘Belzona Records’ for the first few reissues.  Like Document transferring to CDs later on.  Some of the latter are still available and anyone interested should check out the great mail order co. Red Lick Records based in Cardiff, South Wales.  Ironically, by that time I was buying nearly all my blues/gospel LPs by mail order.  A growing international trend which ultimately brought on the demise of the pioneering blues specialist record shops as featured in this article.

Indeed, it was courtesy of US Mail that I bought my first titles by the King of the Delta Blues: Charlie Patton.  These were The Immortal Charlie Patton Nos. 1 & 2 on OJL 1 and OJL 7, respectively.  This awesome and unique blues singer has since long been my guiding spirit through my time on the planet. 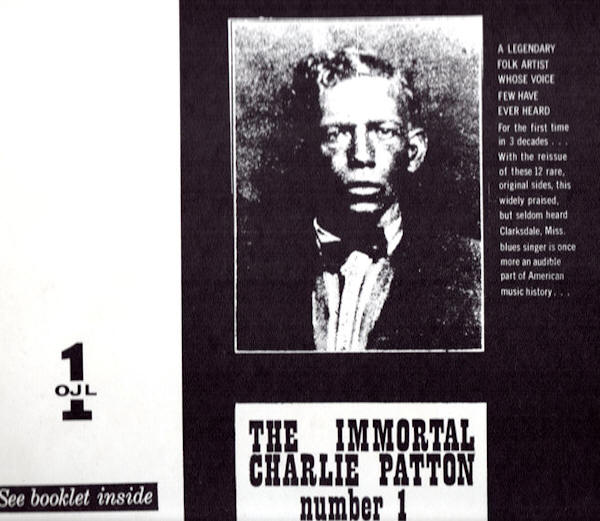 The text on the front of this mind-boggling  album ran: “A LEGENDARY FOLK ARTIST [sic] WHOSE VOICE FEW HAVE EVER HEARD For the first time in 3 decades…With the reissue of these 12 rare, original sides, this widely praised, but seldom heard Clarksdale. Miss. [sic] blues singer is once more an audible part of American music history…”  Sadly, as with many of these Origins, the legend “See booklet inside” was a myth!

As well as the handful of blues record shops (who of course also sold jazz) in Greater London, there were also a similar small group  out in the ‘provinces’.  The most prominent of these, which I visited personally, were The Diskery in the old Bull Ring in Birmingham and Barry’s Record Rendezvous in Manchester.

The former was run by a guy called Maurice who stocked a large 1950s rock ‘n roll section (including doowop) as well as loads of great blues LPs.  The main counter was only a modest affair but it extended the width of the shop for about another 20 feet.  Down there was a smaller turntable on which I was allowed to play LPs of my choice, which as at Dave Carey’s I would wind up with a selection of two or three. I’d be there the whole of the afternoon and now and again Maurice would bring me cups of tea!  Whereas I only called into Barry’s on a couple of occasions at the most.  As well as getting the Origin LP, the superb OJL11: The Mississippi Blues NO.2: The Delta (featuring two more great Patton sides), I picked up an EP on the Swedish label Pirate Records presented by the Swedish Blues Society during the mid-1960s, featuring Barbecue Bob. This was the first of three, numbered “sbs ep1”.  Although I did buy some albums by mail order, including sbs ep3 with Peg Leg Howell.  This small series was titled The Great Country Blues Singers.  No. 2 included 4 Blind Lemon Jefferson sides, but by then a larger series of EPs was being issued on Jazz Collector called Male Blues Singers, Vols. 1-8, which I thought (erroneously) duplicated sbs ep2.

A popular story that did the rounds in the late 1960s was if sales were slowing down too much, a fire miraculously started from which presumably the shop were paid out a sum from the insurance companies.  This may be apocryphal but there were certainly some fires at Barry’s Record Rendezvous! 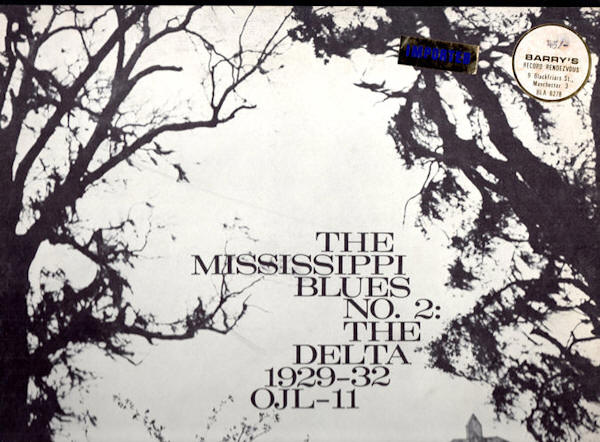 On reflection, I may have got the Peg Leg Howell EP from another shop along with the aforementioned Male Blues Singers series.  This was The Good Noise situated down in Plymouth, in south-west England.  I did a whole lot of mail order business with them and looked forward to the multi-coloured A4-esque loose leaf pages  which dropped into my letterbox every once in a while.  But I never got to visit-Plymouth was just a step too far!  Ironically, I had already been to this city as I was stationed at HMS Drake for most of 1957.  But long before The Good Noise appeared. 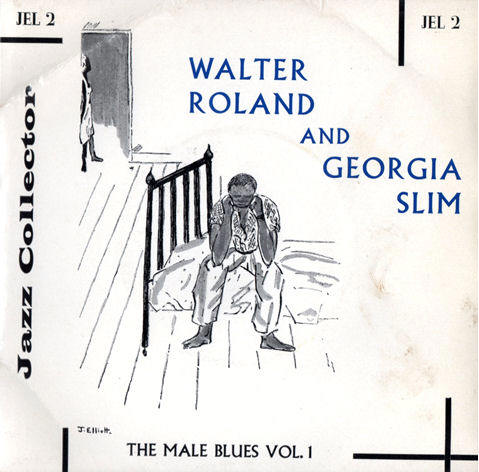 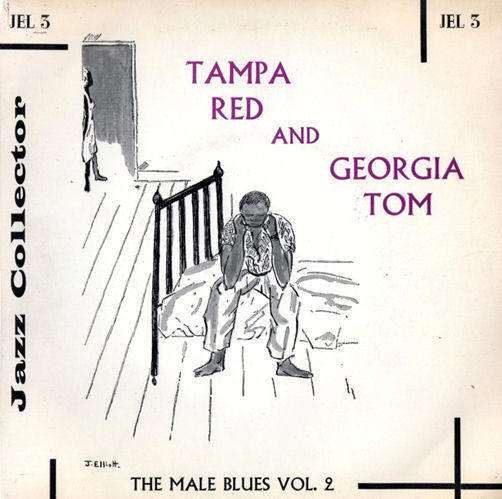 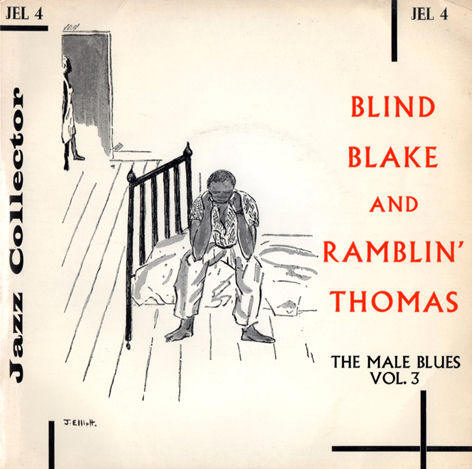 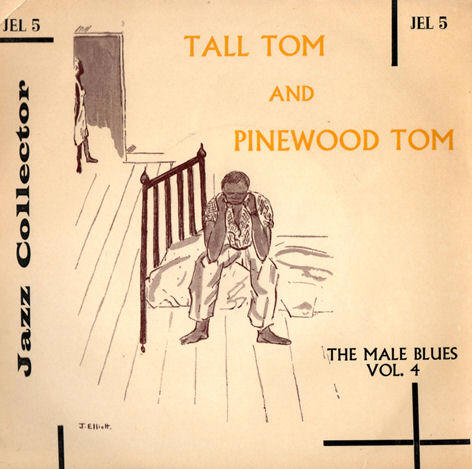 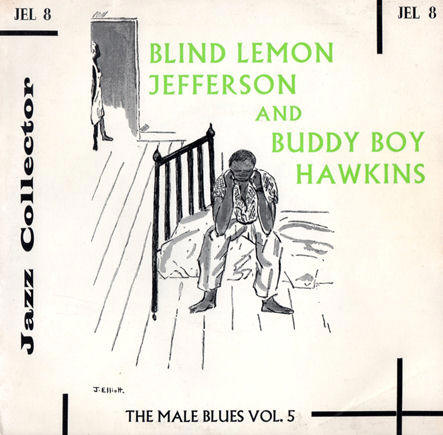 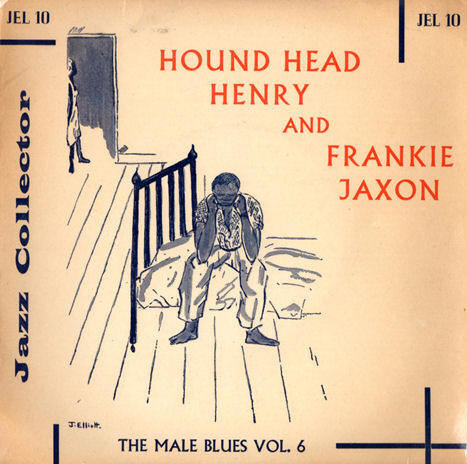 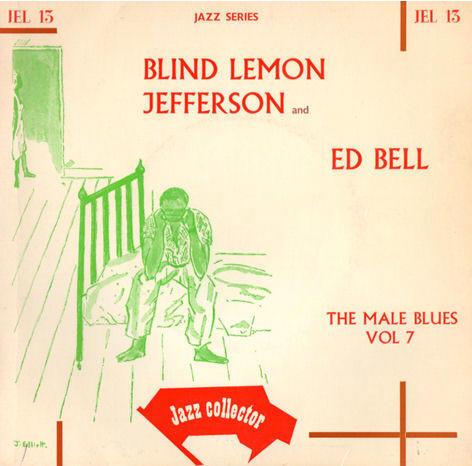 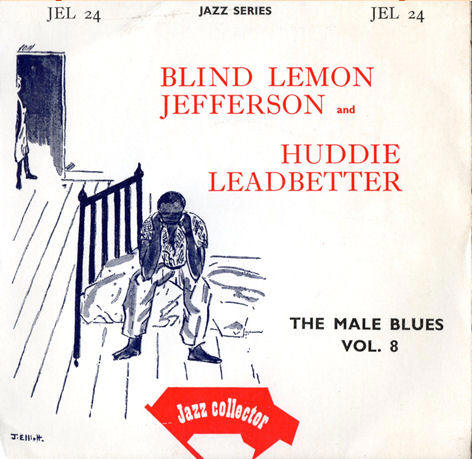 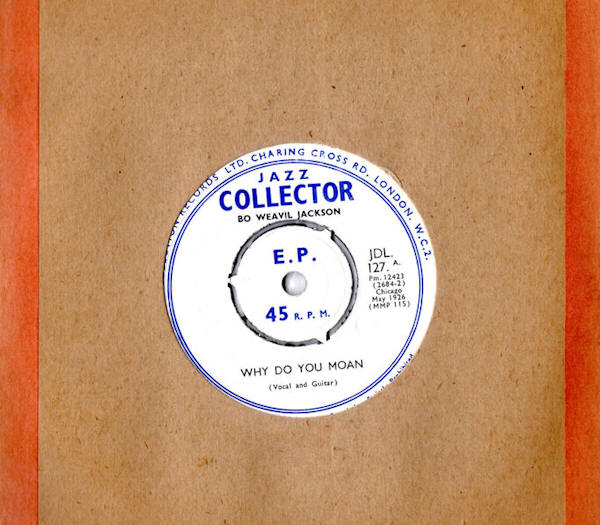 Although stamped with the bold legend as an EP, this is a lil’ old British 45 single issued in the 1960s, with ‘Some Scream Yellow’ on the flipside. The great vaudeville blues singer Clara Smith influenced both sides by Bo Weavil Jackson.

I just wonder how many other copies of this blues single there are still around-up there  no doubt in rarity terms with many of the 78s of the pre-war blues heroes!!

Another great blues record shop was Decoy Records in Salford, run by Nick.  As at The Diskery he would ply me with cups of tea for the day.  I remember that Decoy went on for a longer period than the others already discussed. Indeed, maybe it appeared a little later, as Nick had at least several floors of albums. One was all blues/gospel; one was jazz/roots music and another, I think, featured more popular – style music. Or maybe the roots stuff was up on the pop floor. Hey! This is over 40 years ago!  I well remember when CDs first came out in the UK that Nick spent sometime trying to ‘convert’ me without success.  My answer in those days was if he could demonstrate to me that the Blind Lemon Jefferson CD he had in stock was superior to my vinyl copy on

the old Roots label, I would start buying CDs. Of course the condition was almost identical back then. Nothing like the digitalised reissues of BLJ from Yazoo and Black Swan we have today.

Of course, with the flood of Document CDs hitting the market-on CD only-I soon adopted the new technology.  Though I still feel, as do many collectors, that vinyl has a much warmer ‘in-your-face sound.

Just email your memories to alan@earlyblues.com . Thank you.