The American Folk Blues Festival toured Europe as an annual event for several years beginning in 1962. It introduced audiences in Europe, including the UK, to leading blues performers of the day such as Muddy Waters, Howlin’ Wolf, John Lee Hooker and Sonny Boy Williamson, most of whom had never previously performed outside the US. The tours attracted substantial media coverage, including TV shows, and contributed to the growth of the audience for blues music in Europe.

German jazz publicist Joachim-Ernst Berendt (See note 1 below) first had the idea of bringing original African-American blues performers to Europe. Jazz had become very popular, and rock and roll was just gaining a foothold, and both genres drew influences directly back to the blues. Berendt thought that European audiences would flock to concert halls to see them in person.

Promoters Horst Lippmann and Fritz Rau (See notes 2 & 3 below) brought this idea to reality. By contacting Willie Dixon in Chicago, they were given access to the blues culture of the southern United States. The first festival was held in 1962, and they continued almost annually until 1972, after an eight-year hiatus reviving the festival in 1980 until its final performance in 1985.

According to Mike Rowe’s notes for American Folk-Blues Festival: The British Tours 1963-1966 DVD, Britain was nearly passed over by the tour until Melody Maker magazine and a promoter from Manchester, Paddy McKiernan joined forces with Melody Maker, the pre-eminent UK music paper, and arranged for dates in England.

The concerts featured some of the leading blues artists of the 1960s, such as Muddy Waters, Howlin’ Wolf, Willie Dixon, John Lee Hooker and Sonny Boy Williamson, some playing in unique combinations such as T-Bone Walker playing guitar for pianist Memphis Slim, Otis Rush with Junior Wells, Sonny Boy Williamson with Muddy Waters. The Festival DVDs include the only known footage of Little Walter, and rare recordings of John Lee Hooker playing harmonica.

The audience at Manchester in 1962, the first venue for the festival in Britain, included Mick Jagger, Keith Richards, Brian Jones and Jimmy Page. Subsequent attendees at the first London festivals are believed to have also included such influential musicians as Eric Burdon, Eric Clapton, and Steve Winwood. These festivals directly influenced a generation of young British musicians, with new bands such as The Rolling Stones and The Yardbirds with an interest in blues music already emerging. The festivals were the primary movers in the blues explosion that would lead to the ‘British Invasion’ of the USA.

On 7 May 1964, Granada Television broadcast Blues and Gospel Train, a programme directed by John Hamp featuring Muddy Waters, Sonny Terry and Brownie McGhee, Sister Rosetta Tharpe, Rev. Gary Davis, Cousin Joe and Otis Spann. For filming, the company transformed the disused Wilbraham Road railway station into “Chorltonville”, giving it the supposed appearance of a southern U.S.-style station. About 200 fans were brought by train to the platform opposite the performers. The performance was interrupted by a rainstorm, after which Tharpe performed the gospel song “Didn’t It Rain”.

Full details are given in the separate article on the Blues and Gospel Train Concert 1964. 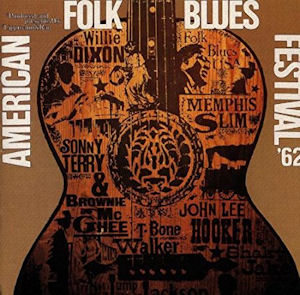 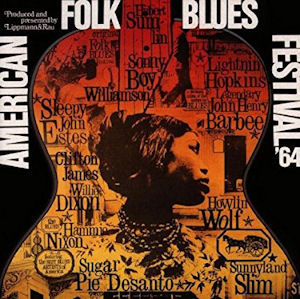 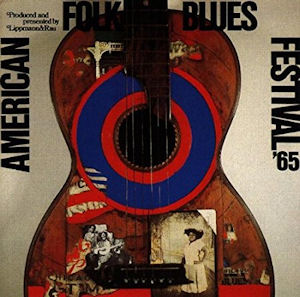 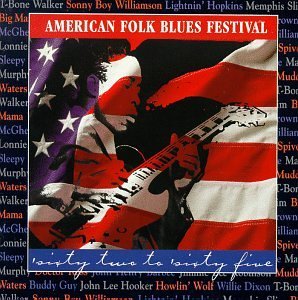 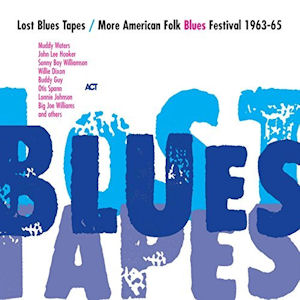 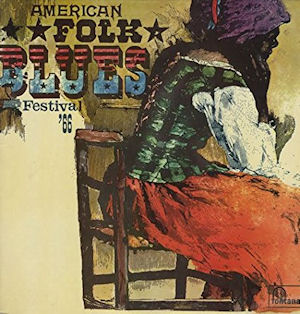 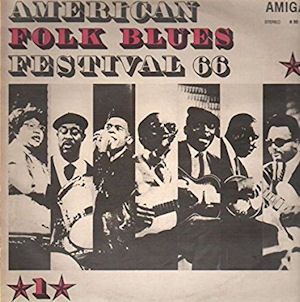 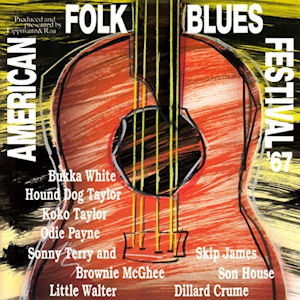 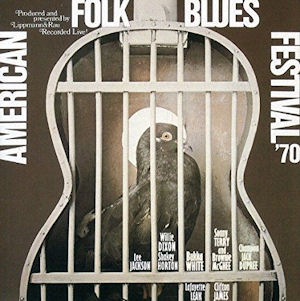 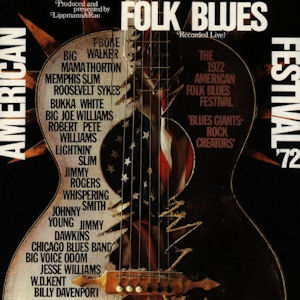 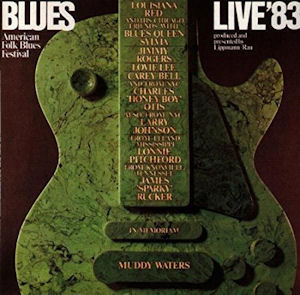 Three DVDs of the full European Tours are still available from Amazon and other outlets (the fourth DVD being The British Tours – see below):

They were all in black and white, recorded live at the Baden-Baden studio of the German public radio and TV network ARD, and (volume 3) of the Danish national broadcaster. The DVDs were by Reelin’ In The Years Productions.

The UK tour schedules for each year (year/day/month) were as follows (dates with no venue were in the UK but venue unknown): 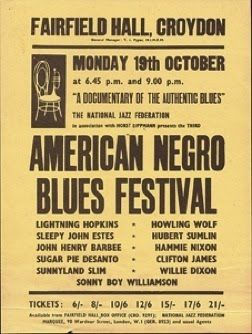 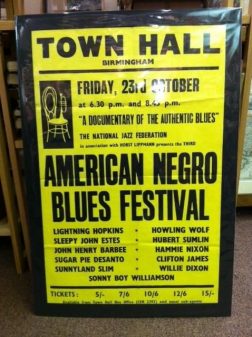 If there are any readers who recall any of these tours/gigs and are willing to share their memories, please email Alan White at alan.white@ukblues.org. We would welcome any additional information for our research. 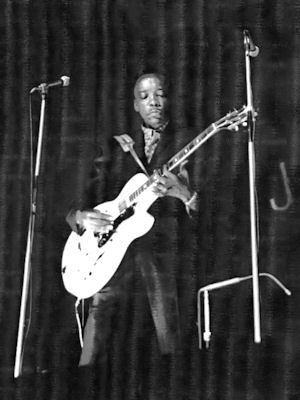 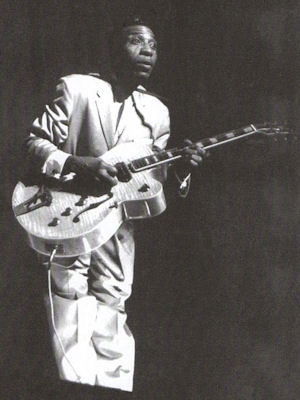 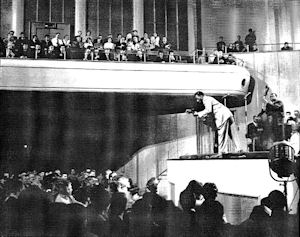 Whilst most of the tour albums were recorded and issued in Germany or France, here is one example of a British tour album: 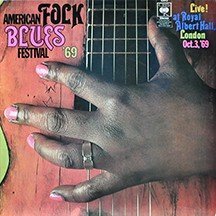 The fourth DVD in the series: American Folk-Blues Festival: The British Tours 1963–1966 was also in black & white, recorded live in England. The DVD was again by Reelin’ In The Years Productions.

The Tracklist and recording date for Volume 4 – The British Tours is:

Joachim-Ernst Berendt was a German music journalist, book author and producer who specialised in jazz.  During the Nazi Germany years Berendt took an interest in jazz and after World War II he helped founding the Südwestfunk (SWF) radio network in the then French occupation zone of Germany. From 1950 till his retirement in 1987 he was in charge of the jazz department of the SWF. In 1952 the first German edition of Berendt’s Jazz Book was published. It became a definitive book on jazz translated into many languages and is still being updated and reprinted. For almost 40 years Berendt produced the jazz program of the Baden-Baden station of the German public radio and TV network ARD. His weekly TV show Jazztime Baden-Baden and his daily radio shows were pioneer work in advancing and popularizing jazz in post-war Germany. Berendt later focused on world music and was one of its early promoters. Berendt initiated and organized many jazz festivals (American Folk Blues Festival, Berliner Jazztage, World Expo Osaka). He was the producer of many records, mainly for MPS Records, and supported the Jazz & Lyrik project, combining jazz performances with readings of poetry (not jazz poetry).  Berendt’s huge collection of records, books, magazines, photos and more is in the archive of the Jazzinstitut Darmstadt.

Horst Lippmann was a German jazz musician, concert promoter, writer and television director. The son of a hotelier, Lippmann played drums in the illegal Frankfurter Hot Club in the 1940s, and wrote for one of the first German jazz magazines, Mitteilungen für Freunde der modernen Tanzmusik (Messages for Friends of Modern Dance Music). After the war he played in the combos of the Hot Club with Günter Boaz. Together with Olaf Hudtwalcker, he was involved in the founding of the German Jazz Federation, and organized and participated in concert tours by the West German jazz clubs. In 1953 he founded the German Jazz Festival at Frankfurt. In the mid-1950s he formed the Lippmann + Rau concert agency with Fritz Rau, and began bringing jazz, blues and rock and roll stars to Germany for the first time. Between 1962 and 1982 he organized the American Folk Blues Festival, performing in England and France as well as Germany and being recorded for television programmes. Lippmann and Rau entered the Blues Hall of Fame in 2012. Lippmann was also known in Germany as a radio personality and as director of television broadcasts.

Fritz Rau was a German music promoter, who was influential in the development of the appreciation of jazz and blues music in Europe in the 1950s and 1960s, and has been a leading promoter of rock and pop music. After graduating with a degree in law he worked in a law firm in Neustadt an der Weinstraße, while at the same time becoming involved in running a jazz club, Cave 54, in Heidelberg. In December 1955, he organised his first major concert, featuring Albert Mangelsdorff at Heidelberg Town Hall, where his abilities were noticed by concert agent and promoter Horst Lippmann. Lippmann then hired him to help run the Jazz at the Philharmonic tours of Europe arranged by Norman Granz, and they began to work together regularly from 1957. Rau also became concert organiser of the German Jazz Federation.  As stated above, in 1962 he and Lippmann established the concert agency “Lippmann + Rau”, and organised the first European tour by the American Folk Blues Festival. Albums by the American Folk Blues Festival artists were also released on Lippmann and Rau’s own Scout and L+R labels. Lippmann and Rau worked together to promote a wide variety of jazz, rock, pop and gospel acts across Europe in the 1970s and 1980s. After Lippmann’s death in 1997, Rau worked as an independent promoter and tour organiser, and also helped establish the Lippmann + Rau Music Archive in Lippmann’s home town of Eisenach. He was nominated to the Blues Hall of Fame in 2012, together with his former business partner Horst Lippmann.

Brian Smith is one of the most prolific photographers of blues artists in Europe, with his photographs, particularly of the British Tours of the American Folk Blues Festivals, being used by publishers and record companies throughout the world. His book “Boom Boom Boom Boom: American Rhythm & Blues In England 1962 – 1966,  The Photographs of Brian Smith” will be published soon. 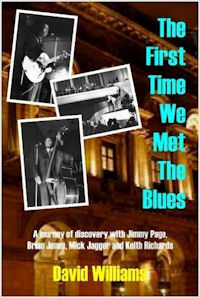 ‘First Time We Met The Blues: A Journey of Discovery with Jimmy Page, Brian Jones, Mick Jagger and Keith Richards’ by David Williams

David Williams grew up in Epsom, Surrey and was a childhood friend of future Led Zeppelin guitar legend, Jimmy Page. Together they discovered what was for them an intriguing and very different kind of music: the blues. As their interest grew into a passion, they befriended other teenage enthusiasts – among them Brian Jones, Mick Jagger and Keith Richards – becoming part of a movement that ultimately brought about the ’60s rock revolution. Part-biography, part-history, “The First Time We Met The Blues” is packed full of great anecdotes and unique insights into the early British blues scene, Page’s formative years as a musician, the beginnings of the Rolling Stones, and much more besides. 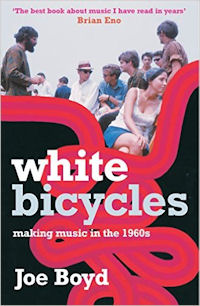 When Muddy Waters came to London at the start of the 60s, a kid from Boston called Joe Boyd was his tour manager; when Dylan went electric at the Newport Festival, Joe Boyd was plugging in his guitar; when the summer of love got going, Joe Boyd was running the coolest club in London, the UFO. More than any previous 60s music autobiography, Joe Boyd’s White Bicycles offers the real story of what it was like to be there at the time.

Sources (In addition to Bibliography):

Thanks to Brian Smith and all readers for their memories and memorabilia.